Shooting Star: The Day I Met a Real Astronaut 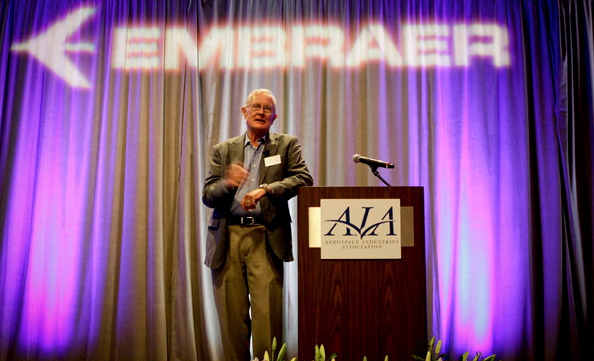 30 Mar Shooting Star: The Day I Met a Real Astronaut

It was a late afternoon and July was almost gone. I was a bit behind schedule when I arrived at the Westin hotel in Fort Lauderdale so I had to pick up the pace. The event I was hired to photograph was set to start in just a few minutes. Nothing I hadn’t done before but something felt odd. It’s an old client of mine and I thought I could predict exactly how the night would go. This one turned out to be different.

It started with a poolside cocktail party. Here, knowing how to set your camera for the imminent sunset in the background is almost second to finding the right language in which to communicate with the guests. And you better be quick at it. When photographing an event, knowing when and how to open a smile is as important as finding out how to get one. Make the guests all feel like stars and you’re doing a good job as an event photographer. And this is particularly important, when the event is actually an Aerospace Industry Association meeting.

Dinnertime had come and we all headed to the ballroom. Decoration was impeccable, the music just perfect and everything was going according to the plan. I was shooting away. Group photos, portraits, toasts, the usual pre-dinner routine. Then, as the guests are served their plates I take a break. No one likes to pose for a photo while chewing a piece of filet mignon.

After a few minutes, the noise was broken by sudden silent as the host prepared to announce a special guest speaker. This is my cue to start looking through the viewfinder again. That’s when the surprise came. The guest speaker: General Charles Duke, Apollo 16 Astronaut. An announcement like that can kill your concentration.

In the history of humanity, only 12 people have walked on the moon and I was in front of one of them. I was actually documenting his presence. For the record, General Duke was neither the first nor the last to land on the moon. But as a lunar module pilot for Apollo 16, he was the youngest man ever to walk its surface.

I was so excited with this opportunity I couldn’t get my finger off the shutter button. Until someone from the event’s organization walked to me and said: “I think we’re good with photos now”. I immediately obeyed my client’s request, walked to the back of the room, pulled a chair and listened to the amazing stories about space traveling, lunar landings, zero gravity and so much more.

At the end of the night, I couldn’t stop thinking about the odds of something like that happening. Three astronauts who have walked on the moon have already passed away. The other nine are all in their seventies. I think one may have a better chance of wining the lottery than to ever meeting one of these icons of the space program. All I can say is that I enjoyed every minute of the day I met a real astronaut. Although winning the lottery seems like it could be a lot of fun too.

This site uses Akismet to reduce spam. Learn how your comment data is processed.